It’s been A WHOLE YEAR since I last visited Barbed Words.  In my defence, it’s been a very busy year.  I moved house, changed jobs…actually, that’s pretty much it so, let’s face it, I’ve just been rubbish.

Anyway, not much writing has occurred, despite having joined a new writing club.  Unless writing Twitter posts count? I’m doing some social media stuff for a small charity, which means spending a lorra, lorra time on Twitter…ploughing through a lorra, lorra crap to find a shiny nugget to retweet.

But, now I’m back and I plan to pick up my neglected story which I started during last year’s NaNoWriMo and finish the damn thing.  The members of my writing group are obviously far too nice and need to become a lot meaner, the literary equivalent of Simon Cowell or Paul Hollywood, and start kicking my butt.

So to get my brain back into creative mode, I’ve gone for a nice, short Three Line Tale. 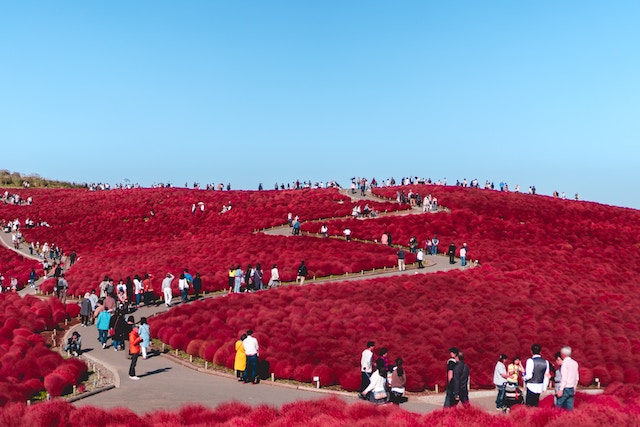 After four years’ scrimping and saving, a lifetime’s dream had finally been realised and I was in Japan, gazing at the glowing red sea of the Kochia plants: an amazing autumnal display of Mother Nature at her finest, a truly awe-inspiring sight which would surely fill with joy the heart of anyone who saw it.

Unless, of course, they were sneezing uncontrollably and their itchy eyes had swollen up so much that the breathtaking scene was just a red blur.

‘Again, I’m so sorry I forgot to pack your hay fever tablets, Jane,’ said my husband, David. ‘This is the best thing I’ve ever seen in my whole life.  But don’t worry, I’ve taken some really good photos for you.’

Well, it’s a start.  In the meantime, good luck to everyone taking part in NaNoWriMo.